This is Why LAX Traffic is Such a Mess!

Look at the satellite image picture above.  When is the last time you saw no traffic during the day when dropping off at LAX?   LAX drop-off traffic is a complete mess and has been ever since Southwest Airlines embarked on their new terminal 1 construction.  It now takes passengers up to 30 minutes just to get into the airport once you are nearby.  On several occasions, it has taken me 20 to 30 minutes just to get from underneath the tunnel to the drop-off gate at terminal one.  It doesn't matter if it's noon in the middle of the workweek or 4:30 am.  The delays of getting into the terminal are ridiculous and caused by a poorly designed construction plan.

The wall you see in red is consolidating traffic from 6 lanes down to 4.  Traffic merging and Southwest drop-off are causing the bottleneck that backs up for almost a mile outside of the airport. I have been flying out of the Southwest terminal for two decades and traffic never used to be this bad even during the busiest rush hour periods.  Cars used to be able to flow in and out of terminal 1 drop-off freely without a bottleneck. 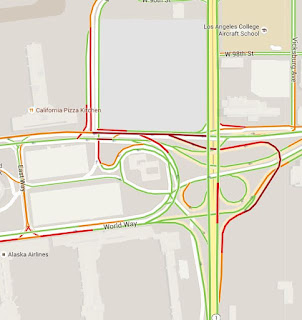 No police officer or traffic manager is capable of managing or correcting the flow after the light.  It doesn't take a genius to see that cars are getting stuck trying to drop off passengers because they now are forced to drive a few hundred yards further.

What is this wall protecting and why does it have to stick out and cut off 2 lanes of drop-off traffic?  The wall looks to be useless has caused hundreds of thousands of passengers to miss their flights who don't arrive 2 before their flight.  Can they simply remove it or push it back until the end of the construction project?

You can thank these companies for the $500M 4 year construction plan & ridiculous mess that looks to be with us until 2018:  AvAirPros, ODEMCO, PGAL and Hensel Phelps Construction Company.

It is obvious that nobody from any of these companies above did any traffic studies on the impact of cutting off 2 lanes from 6 down to 4 that feed into the terminals.  I am also surprised to see very little news coverage on the topic.  The news seems to attribute the problem to the increased traffic volume of passengers but I know this is a completely false excuse.

Are any executives from LAX doing anything about the problem?

Have any other airlines thought about taking legal action against these companies or LAX for the miss-management?

Flying out of other regional airports is becoming a more viable option these days even though I live 10 minutes from the airport.  It now takes me just as long for me to get to John Wayne Airport (40 miles away) as it does to LAX (5 miles).

I would love to hear your comments below.  Please send this blog post to your friends, politicians, and LAX officials.  Let's get this problem solved quickly.

Listening to the Republican National Convention speech about Donald Trump fixing an ice rink years in a few months and millions of dollars cheaper than the Government inspired me to write this lengthy blog post.  My gut tells me this is just incompetence and not an oversight because nothing is being done to fix the obvious problem.  I think LAX is a prime example of bureaucracy getting into the way of fixing things quickly and efficiently.   Hopefully, this blog post will be read by the people in charge and take action.