Are Horses More Dangerous Than Cars and Motorcycles? 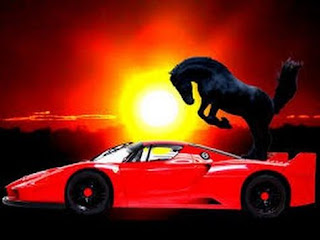 It is easy to think of horse riding as being a gentler, less dangerous activity than riding a car or motorbike. Yet, is this really the case? A look at some historical accidents and research on the subject lets us get an idea of how dangerous it is to get on a horse.

Famous Horse Accidents in the Past

A number of celebrities and historical figures have died or been seriously injured while riding a horse. These include the Mongol Emperor Genghis Khan, who apparently died in the 13th century after suffering a fall.  In more modern times, Superman actor Christopher Reeve was confined to a wheelchair due to a riding accident in 1995.

Horses can also be involved in traffic accidents The most recent stories of this type tend to have involved a trailer or some other type of equine transport crashing or being tripped over.

One of the few famous accidents involving a celebrity, a horse, and traffic came in 1954. American tennis player Maureen Connolly was just 19 and had recently won her third Wimbledon title when she went riding in San Diego. She was pinned between her horse and a concrete mixer truck and then thrown off, with the resulting serious injuries ending her tennis career.

Of course, the number of horse accidents is smaller than the list of car and motorbike accidents. However, we need to take into account that they are also used less frequently across the world. So, how can we hope to compare both modes of transport?

Fortunately, there has been research carried out on the subject. For example, the Journal of Veterinary Behaviour published an eye-opening report that suggested that it is 20 times more dangerous to ride a horse than to ride a motorbike.

They also suggested that equine-related incidents make up a quarter of all fatal injuries in children’s sporting activities. A figure of 1 serious injury for every 350 hours that people are in contact with horses confirms the dangers of this activity.

People in their 20s and 50s are said to be most as risk, with powerful kicks from the horses being one of the main causes of serious injuries.

What About Professional Horse Riding?

There are some very good reasons to believe that horse racing and other professional equine events are safer than people going out to occasionally ride on a horse. For a start, these animals are carefully bred and trained.

Top racehorses are handled by experts all the time, and most top jockeys have been around horses all their lives. Despite the massive popularity of horse racing over so many years, there have very few jockeys who have died in action.

The most famous case was probably that of Frank Hayes. But it wasn’t an accident that led to his death in 1923. Rather, he suffered a heart attack half-way through the race. Incredibly, his horse, named Sweet Kiss, went on to win the race with Hayes still in the saddle.

Another famous case involved Avelino Gomez. The hugely successful Cuban–born jockey died after a multiple horse accident in the 1980 Canadian Oaks. That these are among the few cases to be reported suggests that horse racing is actually very safe.

If we look at a big event like the Kentucky Derby, in over 140 years there has been no reported jockey deaths. While the speed and the risk add to the emotion of events like this, the chance of a jockey coming to serious harm is very low.

To know more about the Kentucky Derby, including news and updates, click here: https://www.twinspires.com/blog/2020-kentucky-derby-news-notes

It seems that horse riding may be more dangerous than driving a car. However, this only applies in certain circumstances. In the case of professional equine events, the risk of injury is greatly reduced.