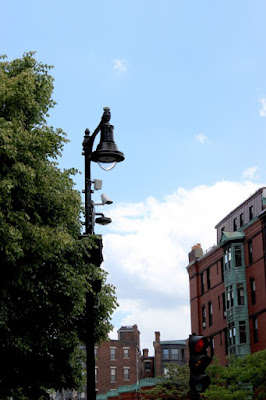 Verizon has devised a system of cameras, sensors, and algorithms that can track the number of times cars fail to yield to bicyclists and pedestrians at a particular intersection.

Every city has at least one dangerous intersection where cars, trucks, and buses jostle for space with pedestrians and bicyclists, often resulting in injury, and sometimes death. Could a network of wirelessly connected cameras and sensors, combined with sophisticated algorithms that analyze how people are behaving on the road, make these junctions less hazardous?

Verizon is using Boston as a test bed to find out. In March, the tech giant began collecting car, bike, and pedestrian traffic data at one of the city’s most hectic intersections. Boston will use the information to redesign its streets, says Vineet Gupta, director of policy and planning for the Boston Transportation Department. The data can measure if interventions such as changing traffic signal timings or installing a bike lane have been effective, he adds.