Tesla Autopilot Gets Confused by Lanes Not Clearly Marked

When the video is slowed down, you can see parts of the white lanes are faded and the car seems to think the left side of the lane — is the right. Fred Barez is a professor of mechanical engineering at San Jose State University. He said, “The lanes are not marked clearly on the road, so the camera attached to the Tesla vehicle is having a difficult time.” Barez is building his own autonomous vehicles with students. He says lanes that aren’t clearly visible can be a challenge for Tesla’s autopilot feature. Barez said, “Tesla believes in having eight cameras all around the vehicle and they monitor the presence of the lanes on the road.” 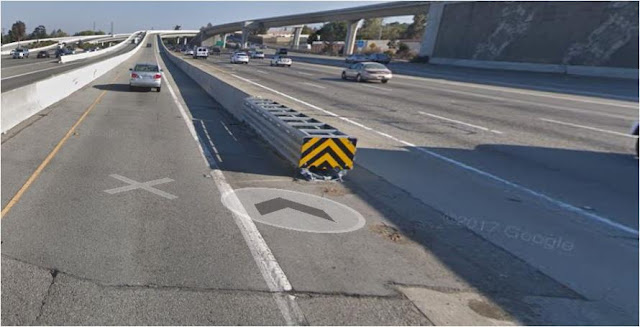 Site of Tesla Autopilot Fatality on 101

On its website, Tesla says it’s now also using a dozen updated ultrasonic sensors “allowing for detection of objects at nearly twice the distance of the prior system.” The company also advises its customers to keep their hands on the wheels, and to pay attention. Barez said, “I believe the Tesla is still pretty safe. It’s just a matter of the driver having to take responsibility as well.” The driver in the deadly crash, according to Tesla, did not take control of the wheel despite warnings. In his video Joshi grabs the wheel seconds before his Tesla would’ve slammed into the median: A couple years ago, Tesla CEO Elon Musk told reporters that California needed better lane markings, because it was confusing his cars’ autopilot feature. Tesla did not immediately respond to KPIX 5’s request for comment on Joshi’s video.

Map of Tesla Autopilot Fatality on 101 in Mountain View, CA

BadIntersections.com has started mapping autopilot accidents and locations where drivers feel that Uber and Tesla did not make a good driving decision.  We are calling these locations "Autopilot Issues" on the map.  Hopefully, autonomous vehicle companies will start using this historic data to help improve safety for future drivers at these locations.  Do a search for "autopilot" in the title and you will find the data.
By Syndicated Maps at 4/06/2018