15 Facts About Vehicle Collisions at Intersections 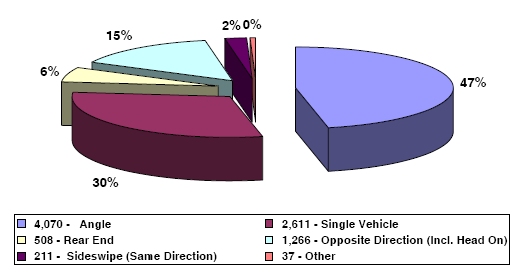 Distribution of Type Crashes at Intersections

In a variety of distinct configurations and sizes, intersections can be constructed. Intersections in traffic design may include as many as six streets that converge. For instance, the crossing of two perpendicular streets and yet another street that crosses them diagonally may require a six-way intersection. With as many as eight or ten roadways converging, highway intersections may become extremely complex.

Here are some factual details to help you think about the safety of intersections.

Several age distinctions are noted in the study of intersection crash factors: collisions involving drivers aged 24 and younger at intersections of traffic signals are likely to be triggered by internal or external distraction of a driver, a mistaken perception of the behavior of another car, or speeding / aggressive driving. Drivers 25 to 54 at intersections operated by traffic signals are usually involved in accidents because of “ critical non-performance error ” (such as from exhaustion or medical impairment), illegal maneuvers, inattention, or aggressive driving. Crashes at intersections where there are stop signs appear to be caused by insufficient monitoring or misjudging the speed of another vehicle among drivers 55 years old and older.

Female drivers involved in traffic signal-controlled intersection collisions are likely to have misjudged the conduct of other drivers or to have been disturbed by an internal situation. Male drivers, on the other hand, due to crucial non-performance mistakes, improper movements, or reckless driving/speeding, are more likely to have been involved in traffic signal intersection collisions.