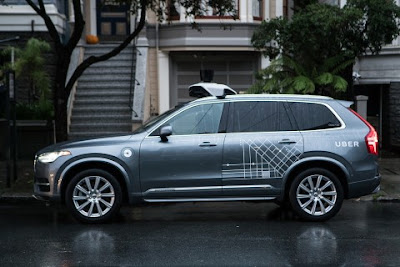 The rollout in San Francisco is another step by Uber to improve its driverless automobile technology, which the company soon hopes to put into cars beyond the XC90 and Ford Fusion. Uber is racing to get its self-driving technology out widely before its rivals, as many large tech competitors are trying to bring autonomous vehicles to consumers on a broad scale.

Uber has started offering its self-driving car service to passengers in San Francisco, making it the second place in the world where Uber offers autonomous vehicles for public use after Pittsburgh, Pennsylvania was the first. It also marks the debut of the XC90 self-driving car in September of 2015, a Volvo sport utility vehicle outfitted with lidar, a kind of radar based on laser beams; wireless technology; and seven different cameras. It was produced in collaboration with Uber’s Advanced Technologies Center, the company’s driverless tech division based in Pittsburgh.

Uber began offering self-driving car service in Pittsburgh this year. “The promise of self-driving is core to our mission of reliable transportation, everywhere for everyone,” Anthony Levandowski, Uber’s vice president of self-driving technology, said in a blog post. It is unclear if Uber is allowed to test its driverless vehicle technology within San Francisco.

As of Dec. 8, the company’s name was not listed on California’s Department of Motor Vehicles website as one that held a permit to test autonomous vehicles in the state. Other companies, including Google, Tesla and General Motors, all hold permits to test autonomous vehicles in California. “All of our vehicles are compliant with applicable federal and state laws,” an Uber spokeswoman said in a statement.

Uber is riding its self-driving cars into a legal showdown with California regulators. The ride-hailing company is refusing to obey demands by the state’s Department of Motor Vehicles that it immediately stop picking up San Francisco passengers in self-driving cars. Hours after Uber launched a self-driving service Wednesday morning with a handful of Volvo luxury SUVs, the DMV sent the company a letter saying the move was illegal because the cars did not have a special permit the department requires for putting autonomous vehicles on public roads. As of Wednesday night, the Volvos — distinctive in look with sensors protruding from their tops — were still roaming San Francisco’s streets.

The company did not respond to a request for comment about the state’s legal threat. “If Uber does not confirm immediately that it will stop its launch and seek a testing permit, DMV will initiate legal action,” DMV Chief Counsel Brian Soublet wrote the company. He referenced the possibility of taking Uber to court. California has issued permits to 20 companies for tests of autonomous vehicles on public roads, mostly traditional automakers and tech companies. Getting a permit for prototype testing is part of legal language negotiated between the state and industry, and DMV lawyer Soublet argued in an interview that the permit process helps maintain public confidence that the technology is safe. “Don’t start doing this stuff. Apply for the permit. Follow the rules,” Soublet said of Uber. To receive a permit, a company must show proof of insurance, pay a $150 fee and agree that a human driver can take control of the vehicle. Operating without a permit arguably gives Uber a competitive advantage. Companies with one must report to the state all crashes and every instance in which a person takes control during testing. All that information is public. Uber is sending another message to California: Other places want us if you don’t.

Alphabet, the parent of Google said it would spin off its self -driving research wing into a stand-alone company called Waymo.  Apple is in the midst of rethinking its automotive strategy.  Companies like Tesla and Lyft continue to work on self-driving software. 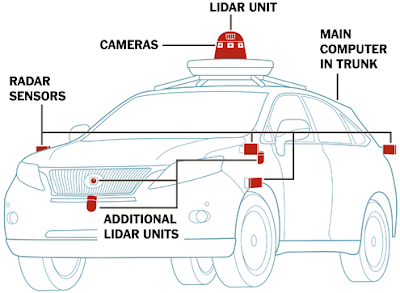 Read more in the NY Times.