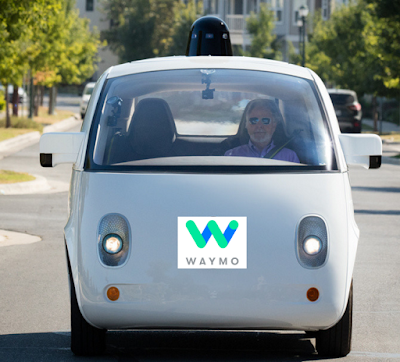 Google’s parent company Alphabet has created a driverless car company called Waymo, signaling that the company is ready to launch a commercial autonomous car service.  Waymo will not likely create its own driverless car but will instead work with carmakers to integrate its driverless tech into their vehicles, as it plans to create a commercial ride-sharing service with Fiat Chrysler according to The Information, and will work with the automotive company to create an autonomous prototype van based on the Chrysler Pacifica.   John Krafcik, will be the chief executive of Google Self-Driving Cars.

On its website, the company said its next step “will be to let people trial fully self-driving cars to do everyday things like run errands or commute to work.” Alphabet executives had said they expected the self-driving car project to graduate from the company’s research lab, X, where it had been shielded from commercial demands. The move suggests the technology is becoming commercially viable. However, Mr. Krafcik didn't explain how Waymo would generate revenue beyond saying he saw opportunities in ride-sharing, transportation logistics, and trucking, as well as licensing the technology to other auto makers. And, while the unit will be expected to generate revenue before long, it is unlikely to face pressure to turn a profit at first.

Waymo has tested prototype vehicles that lack a steering wheel and brake pedals, and Mr. Krafcik said the company is lobbying regulators to allow cars without such controls. Meanwhile, he said Waymo likely would install its technology in conventional vehicles as federal rules require controls such as steering wheels. “We’re not in the business of making better cars, we’re in the business of making better drivers,” Mr. Krafcik said. Mr. Krafcik said the Waymo name stands for “a new way forward in mobility.” Waymo is Alphabet’s 12th business unit—alongside Google, home-automation firm Nest, venture funds GV and CapitalG, and others—each with its own effective CEO.

The unit claims extensive experience developing self-driving technology, including more than 2 million miles of testing on public roadways in the past eight years. At a press event Tuesday, Mr. Krafcik touted the company as the first to test a self-driving car on public roads without a human driver in the vehicle. Steve Mahan, a legally blind man from Morgan Hill, Calif., in October 2015 rode around Austin, Texas, in a Waymo car that lacked a steering wheel and brake pedals.

32 other companies are working on driverless cars