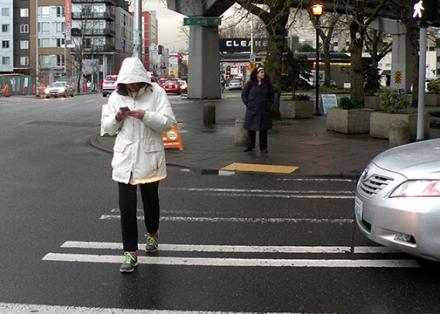 We talk a great deal about how cars congest our cities and pollute the atmosphere. We talk less about how they keep killing and injuring people simply trying to get from A to B on two feet.

Lately, our auto industry conversation about road safety has been dominated by visions, sold by Silicon Valley, of vehicles that minimize or even eliminate the need for input from a fallible human driver. Every year, more cars come armed with “pedestrian detection and avoidance” systems; soon, these systems will likely be standard issue. And not long after that, we are promised, sensors and self-improving algorithms will take over the driving process altogether, eliminating human error from roads and ushering in a new golden age of safety for all their users, whether or not they’re cocooned by a car’s steel frame. Since 2017, General Motors, the US’s largest car manufacturer, has claimed that it is developing self-driving vehicles in the service of a “triple-zero” world: zero crashes, zero emissions and zero congestion.

Car companies swear they are here to help – by selling us products that hardly ever hit anyone or anything. But the truth is that this promise is, at best, a distraction. In fact, much of our discourse around cars, self-driving or otherwise, is less about transforming the status quo than maintaining it, obscuring paths to progress exactly when we need them most, and leaving pedestrians right in the line of fire.

Ask a room full of road safety experts what is causing pedestrian fatalities to increase and most will admit that, well, they are not exactly sure. Every time a car hits a pedestrian, it represents the intersection of a vast number of variables. At the level of those involved, there is the question of who is distracted, reckless, drunk. Zooming out, there are factors such as the design and condition of the road, the quality (or absence) of a marked pedestrian crossing, the speed limit, the local lighting, the weight and height of the car involved. In a crash, all these variables and more converge at high speed in real-world, non-laboratory conditions that make it hard to isolate the influence of each variable.

In the US, meanwhile, it remains the case that pedestrian advocates have failed to engineer the cultural process that transforms a scattered mass of dead and injured bodies into a widely recognized problem. They have not come close. When two Boeing 737s went down, killing 346 people, it triggered multiple government investigations. Crash reconstruction and analysis experts showed up. Corporate spokespeople apologized, began handing out checks to victims’ families and swore to do better. Journalists searched for explanations. But cars kill a 737’s worth of American pedestrians every couple of weeks. Internationally, it is more than three 737s per day. And the news cycle barely stutters.
In 2017, for the first time, each US state was required to submit road fatality reduction targets to the federal government. Most states set extremely limited goals: Wisconsin, for example, aimed to have 342 pedestrian fatalities, instead of 361. Several set a rather fatalistic goal of no reduction at all. Eighteen states went a step further, setting as their target an increase in their pedestrian death count. It is not that they want more pedestrians to die. But they know that people are likely to be driving more, they know what their roads are like and they know the laws of physics. Unlike the unending stream of hype coming from the autonomous car sector, these dour projections received no coverage outside of traffic reform circles. Unfortunately, they are more likely to contain the truth.
Read the full article here.
By Syndicated Maps at 10/08/2019