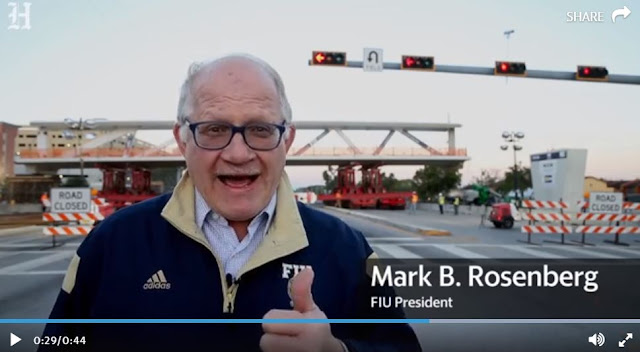 FIU installed a new pedestrian bridge over the perilous Tamiami Trail in a single morning, part of a project to provide students a safe crossing and directly connect its main campus to Sweetwater. Pedro Portal The Miami Herald

Instant bridge? Not quite, but in a single morning, Florida International University dropped a new elevated pedestrian span into place over the Tamiami Trail to provide students a safe route over the perilous roadway for the first time.

Once it’s finished in early 2019, the new pedestrian bridge will link FIU’s Modesto A. Maidique Campus directly to the small suburban city of Sweetwater, where the university estimates 4,000 of its students live.

The 950-ton span was then picked up, moved and lowered into place by special gantry cranes at the intersection of Southwest 109th Avenue in an operation that lasted several hours Saturday morning. A section of the Trail, also designated as Southwest Eighth Street, was closed to traffic Friday evening for the bridge installation, and will remain shut until 5 a.m. Monday.

Companies behind instant bridge idea have a history of failures and lawsuits.

Watch the FIU Instant Bridge Collapse and kill 6 innocent people 5 days later after being installed.
By Syndicated Maps at 3/19/2018